When formulating skin care products, the ‘science’ of sensory attributes can influence many lifecycle stages: we see sensory in action during new ingredient development by Research & Development (R&D) teams, and by formulators as they incorporate ingredients into formulations. Sensory in action is also seen during the promotion of formulations in the market, and in both formal and informal reviews given by consumers. But are we all speaking the same language? Do we understand each other?

To tell a great sensory story, we need to make sure that we can translate the subtle differences in sensory language to ensure that this is understood by all stakeholders.

In one of our earlier blogs, entitled “Sensory in skin care – capturing consumers from the first touch”, we introduced the SenStories™ selector tool which links the language of the consumer with the language of the formulator to provide meaningful sensory observations. It utilises a reliable and reproducible methodology to connect insights on consumer perception and language choice, with the knowledge that ingredient combination and colloidal structure are responsible for any sensorial feel.

In this blog, we will elaborate on the language of the formulator, which is known as the ‘syntax’, as shown on the outer circle of the language wheel below.

‘Syntax’ is the technical language used to describe the sensory attributes of a skin care formulation, as measured by an expert group of trained panellists. These attributes are predefined on well-established scales and include evaluation of the absorbency, greasiness, oiliness, spreadability, thickness, waxiness and wetness of a formulation.

At Croda, we use internal and external panels who are trained in evaluating these attributes and regularly calibrated for accuracy. As such, these panels act as our own human instrument, with the ability to objectively measure the sensorial attributes of skin care formulations. The performance of the panels is closely monitored, with the alignment of the panelists validated through strenuous calibration exercises to ensure confidence and consistency in their results.

How is Syntax measured?

Sensory can be measured in two stages during the application of a skin care formulation: namely initial feel and after-feel.

During the development of the SenStories™ selector tool, we have explored the important role that oil-in-water (O/W) emulsifier systems play in the initial feel of a formulation. Let’s take a closer look at these attributes in the following video…

The evaluation of pick-up, play, immediate after-feel and post-5 minute after-feel has offered us invaluable insight into the sensorial attributes of O/W emulsifiers and how these can be described technically through syntax. Here, we’ll explore four key syntax associated with O/W emulsifiers in turn and pick out some formulations that provide inspiration for meeting sensory expectations.

The first syntax we’ll look at is wetness. This is defined as the amount of water perceived on the skin and is measured on a scale of 0-100 by a trained panelist. As you might be able to guess, formulations with a high degree of wetness could include, for example water, which would have a wetness ranking of 100.

To inspire you when creating formulations that meet the wetness attribute, take a look at our Sublime Protection Sun Lotion SPF 10 which was ranked 76 on wetness by our panel. When applied, the oil in water sun lotion has a light skin feel and provides excellent fresh and cooling properties to a Singapore consumer.

Absorbency is defined as the number of rubs it takes before you encounter resistance to continue rubbing, or at which you perceive rubbing to become more difficult because the formulation has been absorbed. This is not measured on a scale, but rather by the number of rubs, up to 120.

Spreadability is defined as the ease of moving product over the skin and is again measured on a scale of 0-100 by a trained panelist. For example, a formulation with a butter texture might have lower spreadability than a milk or lotion. Our Silky Body Lotion formulation was measured by our panel and was perceived to be 79 for spreadability. This lotion is easy to apply and makes the skin feel silky for a French consumer.

Thickness is defined as the amount of product felt between the fingertip and the area to which the formulation has been applied to the skin. As with wetness and spreadability, thickness is measured on a scale of 0-100 by a trained panelist.

Did you know? You can filter by texture on our formulation finder, helping you to find formulation inspiration that meets sensory expectations. Click here to explore more >

In this blog, we have explored some of the technical language used to describe the sensory attributes experienced during the application of a skin care formulation on to the skin. From wetness and spreadability to absorbency and thickness, our expert panelists are calibrated to ensure objectivity in analysing skin care sensory stories. The reliability and reproducibility of the data that they produce has allowed the development of the SenStories selector tool, which has been designed to help translate technical syntax into consumer semantics for easy formulation development which matches sensorial expectations. The tool can save formulators valuable time by connecting consumer perception with the ingredient combination and colloidal structure responsible for a given sensory.

Discover how to formulate your own sensory story…

To use the tool, simply select the consumer set you wish to explore and then one or two semantics (consumer language descriptors) that describe the sensorial language you would like to be associated with your formulation. You can then select any of the necessary refinement options before emulsifier recommendations are displayed. 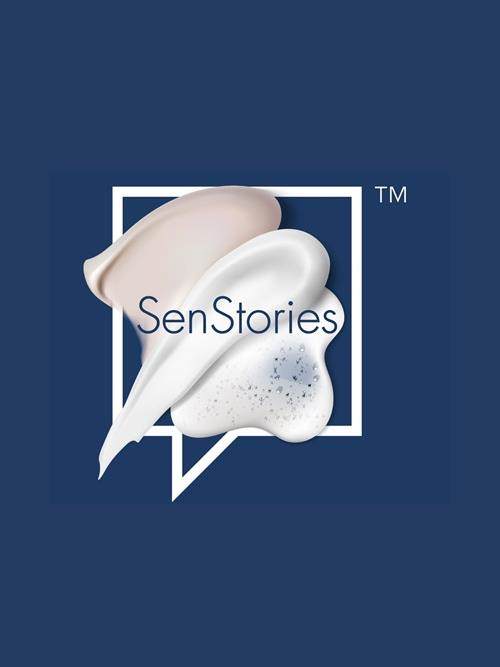 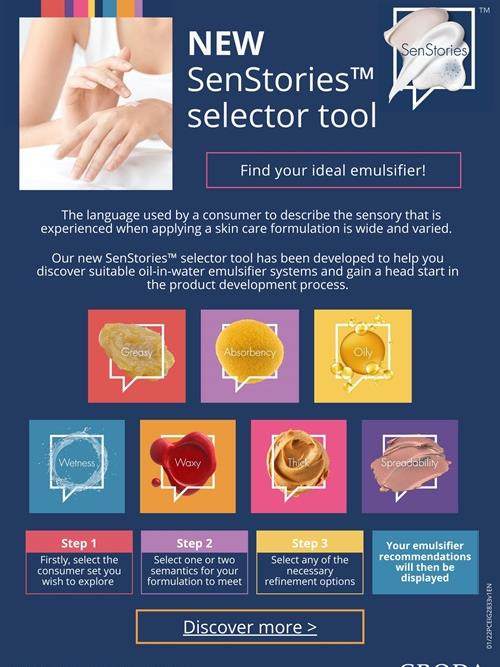 SenStories™ utilises reliable, reproducible methodology to connect insights on consumer perception and language choice with the knowledge that ingredient combination and colloidal structure are responsible for a given sensory. This tool enables predictive ingredient selection for the development of formulations with targeted, desired sensories - saving the formulator valuable time whilst ensuring alignment with consumer expectations.
Start exploring

How a skin care product feels is critical to the experience created by its use and plays a key role in quality and efficacy perception. Discover our new SenStories selector tool, helping you to develop formulations with targeted, desired sensories.

Sensory and texture play a vital role in beauty & personal care, differentiating products and stimulating thoughts about these products. Learn how Croda can assist in ingredient selection to evoke targeted experiences from your formulations.