Pomegranate has been one of the star active compounds in our cosmetics for many years. And its popularity has grown steadily over the past 30 years, with the number of references still increasing (+ 42% of products containing pomegranate since 2015 *). It’s expected growth between 2019 and 2025 should reach the 30% and we can observe many cosmetic products on the market containing pomegranate, from personal hygiene to make-up. 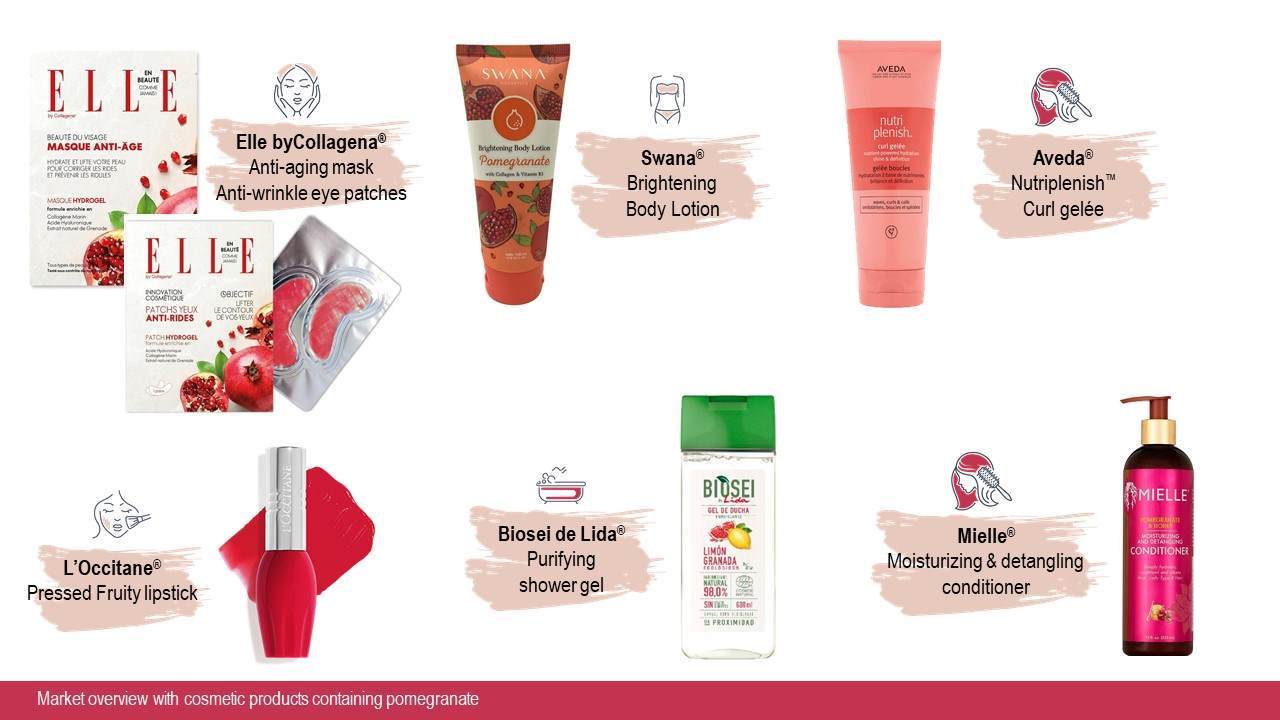 Originally from Persia, the pomegranate has low cultivation requirements which have enabled it to be cultivated in many regions today.

Qualified as a superfruit, due to its high antioxidant content, it is one of the top 10 of the fruits with the highest ORAC index** and is therefore considered an essential beauty ally to prevent skin ageing. Traditionally described in scientific literature as a hydrating, free radical and anti-inflammatory ingredient, pomegranate is also ideal for dry or thirsty skin. In the pomegranate, nothing is to be thrown away! And it is with this in mind that Crodarom and Alban Muller developed their pomegranate extracts. Exploit all the parts of the fruit that can be. Each extract has different cosmetic benefits and is thereby suitable for specific applications.

Fruitliquid™ Pomegranate EC, certified organic according to COSMOS, is made from organic fruit juice. The juice is ideal for tonifying body care, or shower gels and bath products.

Phytolea™ Pomegranate is developed from seeds, by-products of the food industry. Collected seeds are valued by cold pressure to extract oil rich in essential fatty acids such as punicic acid, with protective, regenerating and emollient properties. The ingredient has also demonstrated strong antioxidant properties (11 times superior to olive oil according to test conditions) and a higher refractive power than benchmarks in the world of hair care. This pure oil is therefore very interesting for hair care, oily concentrated serums, or for skincare makeup.

Finally, Cytokalmine® EC is obtained from the pericarp of the fruit, another waste from the food juice industry. This pericarp, very rich in phenolic compounds including punicalagin, allows to create a soothing and antioxidant hyperactive concentrate that relieves sensitive and atopic skins. The ingredient has demonstrated in vitro its protective antioxidant effect by reducing ROS production by 70% at only 25ppm and a soothing ex vivo effect on atopic explants by reducing the release of IL8 by 37% at 40ppm. Cytokalmine® EC, certified organic according to COSMOS (98.6% organic content), is particularly suitable for facials and reactive skin.

Crodarom takes its inspiration from nature to create innovative and eco-designed botanical extracts. Let’s escape through original and creative concepts to offer your formula a natural touch of emotion!