UV filters, and their potential impact on human health and the environment, are receiving close scrutiny from regulators across the globe. Whilst use of mineral UV filters is on the rise due to controversies around organic sunscreens, inorganic particles are not without controversy of their own. One controversy is the ban of titanium dioxide in food in Europe.

Is titanium dioxide being banned?

As well as keeping you, our customers updated about regulations, at Croda, we also contribute scientific information and data to relevant authorities to help shape legislation of the future. Since the launch of our first mineral UV filters back in 1985 we have been engaging proactively in evaluations along with our industry partners to support the continued safe use of titanium dioxide and Zinc oxide.

The trend for mineral only sunscreen formulations is on the rise. In the past 5 years the number of sunscreens launched containing titanium dioxide and/or zinc oxide alone has increased by 80% according to Mintel GNPD. This is largely driven by the fact that titanium dioxide and zinc oxide are the only two UV filters classified as Generally Recognized as Safe and Effective (GRASE) by the Food and Drug Administration (FDA). The FDA1, along with the EU 2 3, says that these UV filters largely do not penetrate the skin, irrespective of size, and are safe for use for dermally applied sunscreens.

Organic UV filters are under significant scrutiny by regulators and legislators alike. Two are already banned in certain territories due to concerns around coral bleaching. More importantly human safety is also under the spotlight. The FDA have requested additional information safety data on the organic filters approved in the US to support their GRASE status for human safety.

You can find more information about environmental and human safety of organics and mineral UV filters in our Myth Busters blogs.

However, mineral UV filters are not without controversy of their own.

Why do they put titanium dioxide in food?

For Croda titanium dioxide is a key ingredient in our Solaveil range of UV filters for cosmetics but it is also a key ingredient in food used to whiten or brighten sauces, sandwich spreads, sweets, pre-cooked pasta and processed nut products, amongst other things.

What’s the latest news about titanium dioxide in food?

In the past few months both Canada, Australia and New Zealand, have joined the UK in approving titanium dioxide for food. But it has been banned in the EU in food, where it is referred to as E171. The European food ban has taken much more press attention, as negative stories always do unfortunately.

Why is titanium dioxide banned in food in Europe?

The EU food ban follows a study into the toxicity of titanium dioxide nanoparticles. While the study did not identify an immediate health concern linked to titanium dioxide it concluded that it could no longer be considered safe in food. The European Food Standard Agency (EFSA) assessment did not conclude that E171 is genotoxic but identified uncertainties with a need to further investigate the effects of the substance in food.

The most significant uncertainty identified by the EU experts was the concern titanium dioxide particles may have genotoxic effects. Genotoxicity refers to the ability of a chemical to directly damage genetic material within a cell (DNA), which may lead to cancer in certain situations.

However, this food ban was not consulted on with member states, and this has added to the controversy, and hopes that the European food ban may be overturned, though such a reversal could take years. In a recent critical review conducted by Kirkland et al, a comprehensive weight of evidence (WoE) assessment of the genotoxicity of titanium dioxide based on the available data was published. In short, they said evidence does not support a direct DNA-damaging mechanism for titanium dioxide in either the nano or micro form.

Is titanium dioxide banned in food in other countries?

Health Canada’s Food Directorate has recently reviewed all the latest data and has disagreed with the conclusion of EFSA, saying in a newly-published report (here) that titanium dioxide comes in many different forms but only a few of these forms are considered acceptable to be added to food.

Its review of the available science showed no evidence of cancer or other adverse effects in rodents exposed to high concentrations of food-grade titanium dioxide and its position is that there is “no conclusive scientific evidence that the food additive titanium dioxide is a concern for human health”.

The Titanium Dioxide Manufacturers Association (TDMA) said it welcomed Canada’s decision and called for a re-think by the EU.

Dr David Lockley, chair of TDMA’s scientific taskforce, said: “We are pleased that the comprehensive review by Health Canada confirms that titanium dioxide is safe when used in food. The state of the science report highlights a need for the EU Authorities to ask for an update of the EFSA’s opinion on E171 to ensure that the EU’s position is based on all available data.”

Titanium dioxide continues to be approved for food in the USA. An FDA spokesperson said the organization’s “evaluation of the safety of food additives and color additives is based on the most current science available at the time, and this includes information made public by other regulatory bodies.” It says titanium dioxide is safe on current evidence. “The available safety studies do not demonstrate safety concerns connected to the use of titanium dioxide as a color additive,” said the FDA spokesperson according to The Guardian.

Food Standards Australia New Zealand (FSANZ) also finished their review of titanium dioxide also with a favorable outcome. The agency says, “Our review found there is currently no evidence to suggest dietary exposure to food-grade titanium dioxide is a concern for human health.”

In detail they state that:

The full report can be found here.

What does the titanium dioxide food ban mean for cosmetics in Europe?

The food ban does not impact cosmetics directly, as titanium dioxide is still approved for cosmetics, but as it has raised questions over ingestion of titanium dioxide it has been decided to bolster the Safety Committee on Consumer Safety (SCCS) dossier on titanium dioxide with data about oral and inhalation routes of exposure.

Croda is working with industry partners and customers to create a new SCCS dossier to demonstrate the continued safe use of titanium dioxide in cosmetics via oral exposure.  Remember there is no experimental data that shows concern from dermal exposure.

“Whilst the food ban of titanium dioxide by Europe is not good news, when you look at the research, you can see that methods and test materials relied on in the 2021 opinion do not reflect realistic human exposure to food containing E171, not only that, but the materials under test are not representative of E171 properties. Unfortunately though, the bad press this has given titanium dioxide in general cannot be ignored.

However, the positive stance taken by the UK, Australia and Canada, all highly respected regulatory authorities, we hope will be reassuring to customers. As well as the positive and proactive steps we are taking, along with other titanium dioxide suppliers and multinational companies who use titanium dioxide on the SCCS opinion for cosmetics.”

UV filters, and their potential impact on human health and the environment, have always been under close scrutiny by regulators, and never more so than in recent years.

And whilst no UV filter is completely safe from scrutiny, mineral filters are fortunately under less scrutiny than organics, and therefore continue to be the most increasingly used UV filters in sunscreens and skin care products.

The safety of mineral UV filters, like titanium dioxide, is not under question for dermal exposure. They continued to be approved by all regulatory bodies globally, in fact it remains only one of two UV filters considered GRASE by the FDA.

If you would like any more information on the topics discussed in this blog, or support in your sun care developments, do not hesitate to contact us where our sales representative can put you in touch with one of our experts in your area. 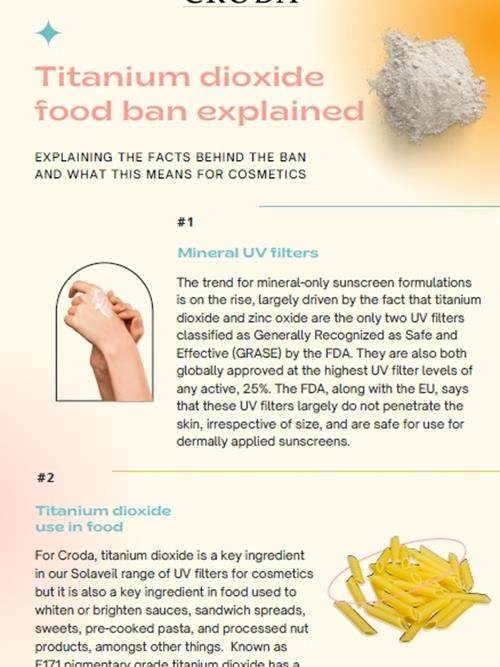 The Solaveil™ team debunk some of the biggest sunscreen and UV filter myths and share the facts.

The Solaveil™ team debunk some of the biggest sunscreen and SPF myths and share the facts. Tackling some of the most common misconceptions about sunscreens amongst the general public, this blog will help separate fact from fiction…

Want to learn more about the key themes from this blog?
Contact us